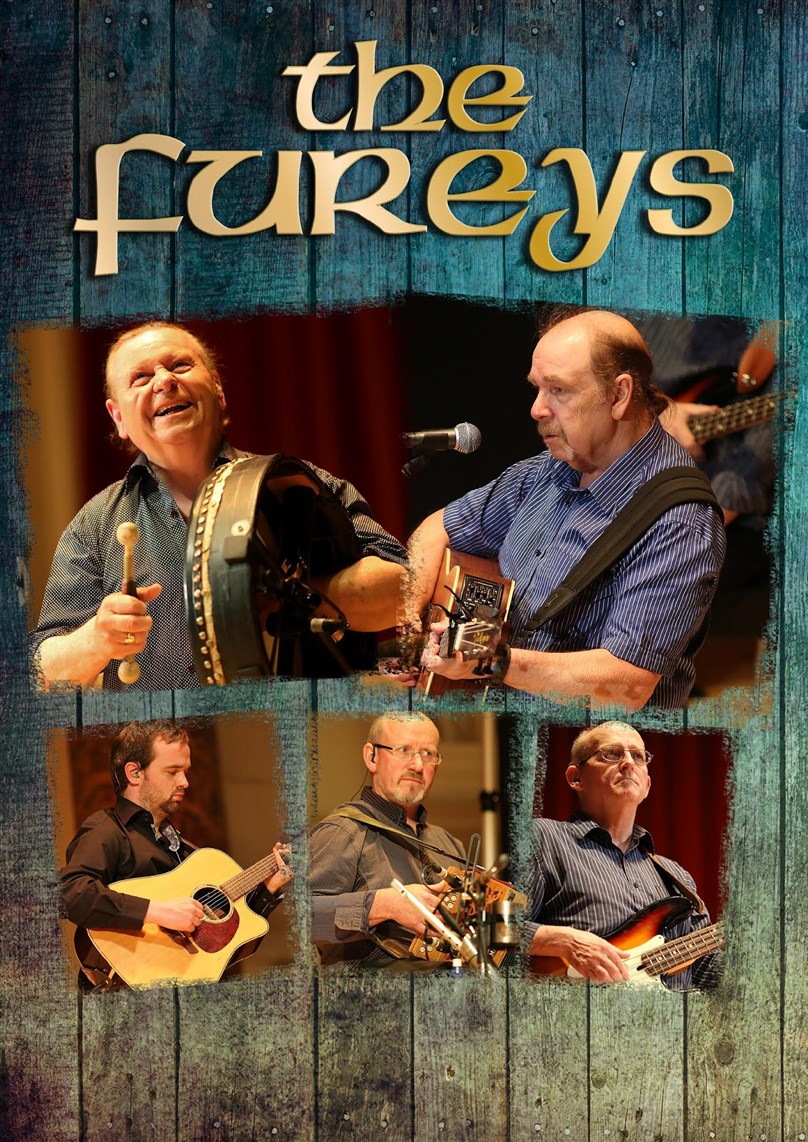 When The Fureys return to the stage of The Sinden Theatre, Tenterden on Thursday 23rd March, they will treat their audience to one of popular music’s richest legacies. They are one of Ireland’s all-time most acclaimed and influential middle of the road, folk and traditional bands. Fureys classics like I Will Love You, When You Were Sweet 16, Red Rose Café, Leaving Nancy, The Old Man, From Clare to Here and The Green Fields of France have become the soundtrack to the lives of fans all over the world.  The Fureys indelible musical footprint is rivalled only by their vast collection of personal stories of their musical experiences and friendships, gathered by Eddie and George Furey along an amazing 45-year journey which shows no signs of reaching a final destination. The Furey brothers were still trying to make it as folk singers in the late Sixties when Eddie Furey shared flats in Scotland with then fellow folk stars-in-waiting, Billy Connolly and Gerry Rafferty (of Baker Street fame). Eddie recalls:’It was quite a group to be living under the same roof and we had great fun. I bet the neighbours never slept with all the singing and drinking’. So impressed were they by the quality of Gerry Rafferty’s songwriting at that time that they recorded his song, Her Father Didn't Like Me Anyway - now a Fureys classic. Eddie and George Furey are particularly proud of their UK chart success with songs such as I Will Love You and When You Were Sweet Sixteen, which in turn helped bring Irish folk and traditional music to a completely new audience. The band made their Top of the Pops debut in 1981. They ran into a problem when the show’s producers insisted that their own backing tape be replaced by a tape recorded by in-house musicians. The Fureys weren’t prepared to have music that wasn’t their own played to TV’s watching millions. George had a solution: "When they weren't looking, I replaced their tape with ours. No one knew I had switched them."  The Fureys will jump at any chance to play... not just on stage. Stories of the band striking up spur of the moment music sessions with fellow music stars who happen to be around are legendary. Joe Dolan, Philomena Begley, Tom O'Connor, Chris Rea, the Chieftains, Pete Seeger, Tom Paxton, Liam Clancy and Sean Maguire are just a few of those who have joined The Fureys for their spontaneous sessions, each one with a story begging to be told. Coronation Street, Royle Family, Keeping Up Appearances and Heartbeat star, the late Geoffrey Hughes, had a keen interest in Irish music and would play the Bodhran with the band. He once joined the guys for a legendary all-night session in the Europa hotel after starring in the Christmas pantomime at the Grand Opera House next door. The Fureys also struck up an unlikely music session with Kool & The Gang, Midge Ure (Ultravox) and other music co-stars backstage during an episode of Top of the Pops. There was a BBC strike and all of the show’s artists found themselves at a loose end. Alas, there are no recordings of how this fusion of styles came across. Eddie Furey recalls how "many musicians have told us we influenced them after hearing a record from their parents or grandparents' collection". Dave Stewart of The Eurythmics started out as a stage hand working in a theatre in Newcastle and credited Eddie with teaching him his first chords on the guitar. Eddie would return the compliment by joining Dave on stage in Paris for a jam during the latter’s wedding to Bananarama’s Siobhan Fahey. The Fureys will be performing all of their best loved songs at The Sinden Theatre, Tenterden on Thursday 23rd March.  Fans can rest assured they will be treated to one or two entertaining tales on the night for good measure!